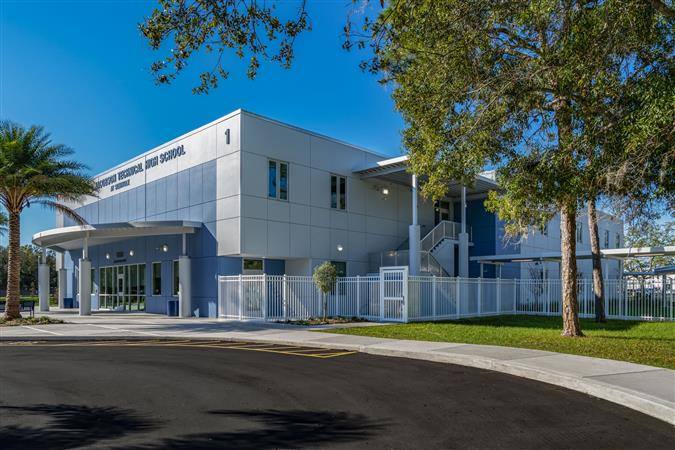 In memory of Richard Jacobson, his three lifelong friends- Frank Chivas, Bob Mclntyre, and Ed Droste- joined together to live out Mr. Jacobson’s dream of opening a vet building for the next generations to learn and prepare. After his passing, members of the Richard O. Jacobson Foundation took the three men out to lunch for what they thought was a chance to break bread over Jacobson’s memory. Instead, each man was gifted $5 million to boost their charitable work in Tampa Bay. Chivas, Mclntyre, and Droste never expected anything in return for the final months of kindness to Jacobson or their years of friendship, and they now see the $5 million gifts as a duty carry on the legacy of service provided by Mr. Richard Jacobson.

Partnering with JE Dunn Construction as the General Contractor, Trident Building Systems helped with the Vet Tech Building in the RO Jacobson Technical High School in Seminole county. Their mission is to prepare every student is well prepared for life beyond high school, whether they plan for a 2-4 year college program or an entry level position to jump start their career.

Within the RO Jacobson Tech. School, the teachers and staff worked long ours to prepare an exceptional program by offering a variety of career and technical programs, including: Construction Technology, Nursing, Electrical Wiring, Marina Mechanics, and Veterinary Assisting.